Although legal, alcohol poses a very serious challenge to the healthy wellbeing of a cross section of people. Alcohol dependence is a very serious problem and several researches have listed alcohol as being more deadly than cocaine, and responsible for far more deaths, violence and crime than narcotics.

However, if the study by a Canadian Pharmaceutical company is anything to go by, many people suffering from alcohol addiction and alcoholism can get help from cannabis.

The study has joined a growing body of research that points towards cannabis as a potent solution for individuals looking to reduce their dependence on harmful substances including alcohol, opioids, tobacco and illicit drugs.

The survey was commissioned by Tilray, a pharmaceutical and Cannabis Company and the complete reports of the study are published in the International Journal of Drug Policy.

A total of 2,102 cannabis patients took part in the study. Of those, 973 participants reported past or current alcohol misuse being a motivating factor in their cannabis treatment.

After undertaking a medical marijuana program, 44 percent reported consuming less alcohol over a 30-day period; 34 percent said they reduced the number of drinks they had per week; and eight percent reported not drinking any alcohol at all.

Philippe Lucas, a graduate researcher at the University of Victoria and co-author of the study, noted that “these findings may result in improved health outcomes for medical cannabis patients, as well as overall improvements in public health and safety.”

Together, these studies are building a fact base for cannabis as a safer substitute. However, this is not to say that cannabis is entirely good, but when you consider the physical and psychological harm that substances like alcohol and opioids can create, cannabis is a better option.

Studies of this nature are a continuing research as there are several dynamic factors at play. However, the success of the study is a pointer that there is a sense of substantial evidence of cannabis efficacy in helping to deal with substance dependence, particularly, alcohol dependence. 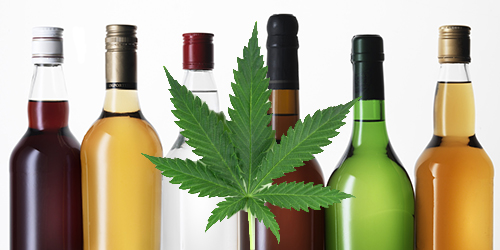